I’ve read all about WinSXS (Side by Side) and how it tries to solve the DLL Hell problems that have plagued Windows for ages, but I thought it was ridiculous that this folder was taking up over 10 gigs of precious space on my 64 GB solid state drive. A few months back, I replaced my laptop’s optical drive with a 500 gig HDD to try to move some of my media and documents over. However, when I went to install the latest service pack to Visual Studio today, I noticed I didn’t have enough space to install it. I used a simple tool called TreeSize Free to analyze the disk space and see what was taking up all the room. A quick drill down of the largest item showed that the WinSXS folder was talking up 10.2 GB of space.

Some research showed that if you have Windows Vista SP1 installed, there is a tool called VSP1CLN.exe in the C:\Windows\System32 folder which can be used to clean up the old (pre SP1) files to regain some space. The downside to this is you won’t be able to uninstall SP1, so you should make sure the system is running stable with SP1 before running the tool. I looked for this file, but quickly realized that it could not be found! It turns out this was because I don’t have Vista SP1 installed (I actually have SP2 installed). If you have SP1 installed, you can use the VSP1CLN file in place of COMPCLN in the directions below.

You can check your Service Pack version by looking at your computer properties: click Start, then right clicking on Computer and clicking Properties. This showed I was running Windows Vista Service Pack 2: 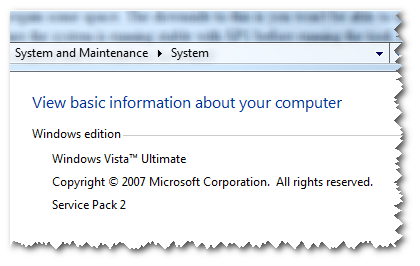 A bit more research later and I found that Vista SP2 has a similar Service Pack Cleanup Tool in the same C:\Windows\System32 directory called COMPCLN.exe. You can start the program by using the following instructions: 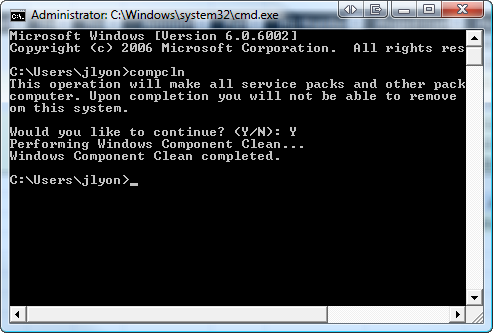 55 replies on “How To Reduce Size of WinSXS”

It’s a useful tip, but I only saved 400MB – with Vista now hogging almost 30GB on my hard drive. Seems the operating system is poorly optimised.

No one with more than a single brain cell uses Vista.

Re: No one with more than a single brain cell uses Vista.

We desperately need competitive alternative to the Windows Totalitarian monarchy.

Thanks for the comments! I’m glad to see that this has helped others and it’s really interesting to see how much space it has saved for the different people (400 MB, 1 GB, 1.9 GB).

this command does not exist anymore in windows 7

here is solve mate download defrag 14 and use it for frag files and get ur all free space i got back 40 gb 😀 :D:D:DD: wooow i love myself D: and this a favor from ur turkishh friend add me on facebook

Does this tool is also applicable for Windows 2008?

@amgadelsaeigh: Thanks for the heads up on this not being applicable to Windows 7

@Ernesto: I haven’t tested this on Windows 2008… you can always try it and let the rest of us know though! 😉

@Cal:
it’s normal for the size discrepancy if your files are compressed. decompress your C: drive and watch your speed increase!
@Mustafa:
i believe you are confused…defrag merely reorganizes files, not delete…

Great, concise article. I saved about 3GB this way which I needed badly! Thanks Josh!

Of course this does not (yet) exist in Windows 7 or Windows 2008 R2. A service pack has yet to be released for those operating systems !

Windows SxS is used for more than just full-on service packs. As different libraries are installed or upgraded the SxS folder serves as an assembly cache for previous versions of the libraries. This means this could also apply to other ‘minor’ updates like security patches or even other updates (vendor/software).

0.9 GB saved. Not as much as I’d hoped, but every little bit helps!

What about Windows7??? how to clean it in win7, anyone help me:sad:

Hi I Found How It Works In WIN7
1.Open My Computer,
2.Right Click on The Windows System Drive and Click on Properties
3.Then From The Properties Dialog Click On “DisK Cleanup” in General Tab.
4.Wait for a while to Open The “DisK Cleanup” Dialog.
5.Now Here it has a Option On Lower Left “Clean up system files”.Click on it.
6.”DisK Cleanup” Dialog will Re-Open. Now you will find “Service File Backup Files” in “Files to Delete” Box. Just Tick It Out and click Ok.
7.A Conformation Pop-Up Will Open, Click “Delete Files” to Proceed.
8.Its All Done.:D:D

had file of 8.something
brought down to 7.something
thnx!!!

I really believe this step involving the size of this folder in windows vista to be a step backwards for Microsoft. How does a department go about creating and deploying windows 3rd party images to PC’s from a 20 GB Windows install with MS Office, I cannot believe MS took this route. ( Well it can be done but what a waste of time and disk space.)

thanks for this information…i knocked the size of my winsxs folder down from 10.1gb to 8.2gb..im well chuffed…thanks again x x

Thanks – used this and got back over 3Gb (running SP2)

Now how do I get rid of all those dll’s that go with old versions of applications or applications that I have since uninstalled??? 🙂

sounds like its time to reinstall rather than go messing around

The command is now called compact.exe . 😉

Thanks so much, I could kiss you! X

Went from 19.4GB down to 17.6GB… pretty sad that just a base install (Vista x64) with a small mixture of software uses up almost the entire space of an 80GB drive.

It gave me a GB or more. Thanks

I found 2gigs of queued error reporting and will everything else i saved 5 gigs, thanks alot

Thanks mate. COMPCLN.exe cleaned up GB’s of …..

Well done, Josh. With this tool, some have found a way to save some space on their hard drives.

My C drive doees not have a clan up button…and compcln is also not found, did any one done this onb windows 2008 R2?

What a pile of horseshite. Microsoft are wankers.

@Thanks for harming others

If there were good programers in this world, winsxs folder would be unneeded. But on this world is a lot of bad programers. Programers who don’t follow standards and they don’t know or want to program correctly. This is the real reason for winsxs folder.

Look at C++ it is over 30 years old and it still has 99% of compatibility. If i compile my 30 years old program with the newest compiler, compiler will without problem compile program and run it.
Now do the same with dot.net program 1.0 and compile it with 4.0 i dare you! It’s just don’t work!

Just look at windows you have MFC30 MFC32 MFC40 MFC42,… files but if there would be good programers at Microsoft there would be only MFC file. And this file would be compatible with windows 3.1 and windows 7 programs! Same interface!

Thanks a ton.. i freed 6gb of data. Just run disk clean up in windows 7 and select the big junk of files to be deleted.

Please suggest … does above share procedure also work for window 7 (Home Basic) ……. if NO then please alternate way???

select which you want to remove

to view size of folders

Thank you very much good to have good people giving good advise. I just gained 2 gb more space anther trick that helps me is to compress files to save space in the properties options but be careful not to compress vidios or pictures as they may not return to full size. washerguy

Thnaks for your advice. After executing the program /tool i got about 1GB back on my C dRive.